Crews from both companies were called to an explosion to ensure safety to all members involved.

The Los Santos Emergency Medical Services (LSEMS) and Los Santos Police Department (LSPD) were called to an explosion with flames in Chumash on 19/MAY/2021.

When LSEMS scene leader Julia Knox approached the scene, she assigned all firefighters on duty to responsibilities. Within minutes, LSEMS and the Fire Department had set up decontamination zones for anyone who may have been exposed on the scene. LSPD leadership tasked their officers to set up barriers across the scene to protect those in the vicinity.

"I would like to thank the Los Santos Police Department for the teamwork and coordination demonstrated," said LSEMS Chief Nicole Crawford. "With your help, we were able to efficiently and most importantly safely do all our parts in a group effort." 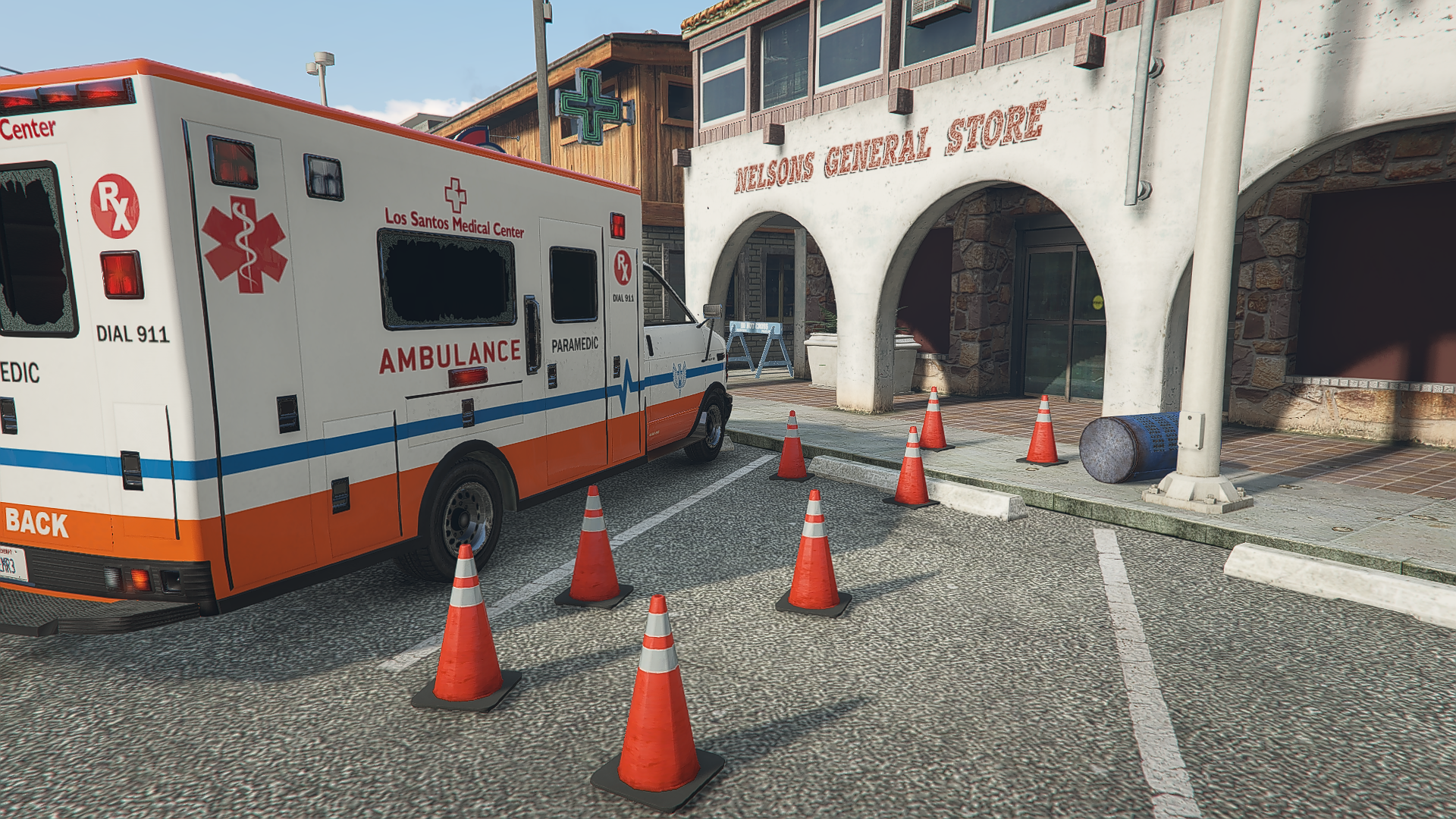 Pictured above are the decontamination showers being set up.
Upon entering the scene, LSPD used a fire extinguisher to put out flames by the entrance. After further safety checks on the door, we deemed it safe to breach. The battering ram was deployed to break open the locked door. Once inside, LSPD was tasked to ensure there were no threats to LSEMS and themselves. LSEMS and the Fire Department were responsible for ensuring no fires spread within the building and the flames were controlled. The building was being used as a drug lab so it was required for all firefighters to dress in their hazmat suits.

"I would like to commend LSPD for their contributions to the scene," said LSEMS scene leader Julia Knox. "They helped keep Los Santos safe and assisted with contraband."

Once the building was cleaned up, LSEMS and LSPD scene leaders coordinated to move the crates into vehicles safely. Due to the high volume of materials needing to be collected by both LSEMS and LSPD, multiple vehicles were needed. 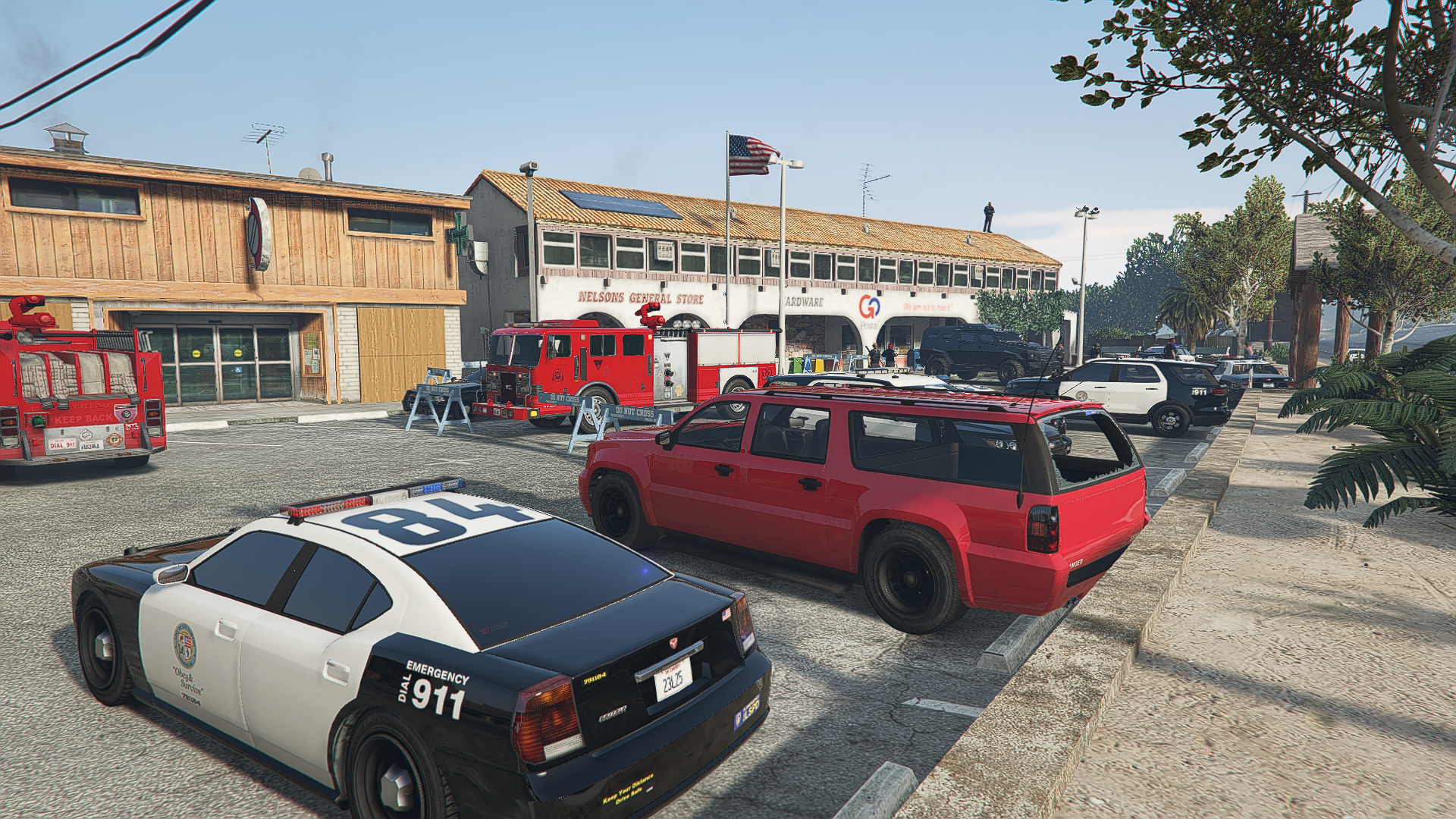 Pictured above is ENGINE-1 being loaded up with crates with ENGINE-2 and crew on standby.
Once all vehicles were loaded up, LSEMS were escorted to Fire Station 7 to dispose of all chemicals found on the scene. Internal staff at Fire Station 7 helped to remove and clean all vehicles that were touched by chemicals. Once the unloading and storing of chemicals finished, the firefighters and LSEMS staff posed for a picture to honor all hard work done by both departments.

Master EMT Julia Knox for her word in leading the scene. Without her guidance, the scene would have been cluttered. She effectively communicated with LSPD scene leaders to pass messages between departments.

EMR Remmi Corsetti for her work on the scene. She was tasked with filling up water bottles to help the firefighters inside and was also on standby in her ambulance if injuries happened.

All firefighters for their bravery in entering a building and their ability to work as a team to quickly and safely dismantle the drug lab. "I would like to commend our firefighters who risked their lives," said scene leader Julia Knox. "They went inside the fire and safely tore down the lab with disposing of dangerous chemicals that presented a threat to those outside including LSPD."


The LSEMS team consists of EMTs, Paramedics, and Firefighters who stabilize and monitor patients until they reach the hospital's emergency department. Every day, the team transports hundreds of patients through the doors of our hospitals.