Throughout the month of January, the City of Los Santos and the Los Santos Police Department witnessed a large number of frauds and scams. There have been numerous warnings issued in Press Releases and this is another one! If you do witness a fraud or become a victim of one, please, do not hesitate to report it to the Investigations Bureau through the crime reports.

On Friday, January 17th 2020, shortly after starting their shift, Police Captain Lewis Langley and Chief of Police Samuel Osborn walked outside the Mission Row precinct and were made aware of a civilian being scammed.

Chief of Police Samuel Osborn issued a ticket of $100,000 to Brianna Scott and contacted the government to arrange the return of the $100,000 illegitimately taken from Zeiwa Gueye, which should be processed within the next 2-5 Business Days.

The contract was made at Mission Row and we have received video evidence of the contract being made. We have recovered the initial footage used to create the fake contract and have decided to share it with the general public with the aim of ensuring that all citizens are not easily fooled! You can access the footage down below.
Preview the footage from the incident.

The LSPD would like to reiterate to all citizens that contracts are very difficult to enforce, we recommend contacting a realtor to handle the sale of any houses.

OFFICER OF THE MONTH, January 2020

Each month, One officer is selected by our Police Supervisors to receive this most prestigious award. This award is an overall congratulation for universal commitment, achievement, and excellence throughout the department. An officer who achieves the 'Officer of the Month' award is an exemplary member of the department and someone who should be looked up to as an inspiration and role-model.

This month, the Los Santos Police Department recognizes the hard work and dedication to duty, of Officer Vuk Minkhalimov has demonstrated amazing dedication to the department striving for the best, and pushing to help grow and develop the newest members of the family.

Officer Minkhalimov joined us from Russia; he came from a rough background but has demonstrated great things within the department, and no matter ones history they forge their own destiny. Pushing himself to new limits, he has become a huge asset to our field training program. Vuk has a very small group to thank for his growth but due to the favor of Ania, who took him in during a dark time in his life, this man has grown into one of the departments finest.

With Officer Minkhalimov's history in MD, he has shown that great dedication and commitment puts a person to the highest level possible. We foresee great things and look forward to seeing the shining path that Officer Vuk Minkhalimov lays before the department! Keep it up and see you at the top Officer Minkhalimov! 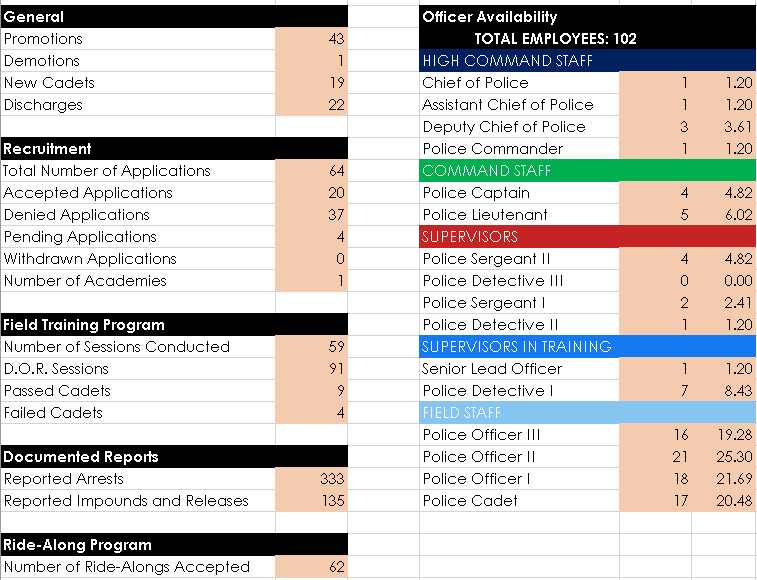